Gladwin, the county seat of Gladwin County, is located in central Michigan just a little to the east, at the junctions of M-18 and M-61. Situated on the Cedar River, this city started around 1875 during the lumber boom, taking on the name of the river. It later was renamed after the county when it was discovered another city had the name of Cedar.

Gladwin has grown slowly but steadily over the years, both as a crossroads town and with many small auto manufacturing firms moving to the area. It also is supported by tourism, with visitors coming to the many lakes and streams nearby, as well as the dam pond just northwest of town.


West Branch, the county seat of Ogemaw County, is located at the junction of M-55 and M-30 in Michigan’s northeast Lower Peninsula.

This town was given its name from its location on the west branch of the Rifle River. It began in the early 1870’s when the Jackson, Lansing & Saginaw Railroad built a line to the area for transporting lumber. It was given a post office in 1873 and organized as a village in 1885. It later reorganized as a city in 1905.

Since then, West Branch has experienced steady growth, with a diverse economy supported by tourism, small businesses and various production facilities, such as machinery, lumber processing and auto industry related products. The downtown area contains many unique shops and restaurants, and demonstrates a strong community spirit in its careful preservation of many its turn-of-the-century style buildings and architecture.

Secord Lake The amazing Secord Lake waterway is a 2200 acre, all-sports, dammed up Tittabawassee River at the top of the waterway that flows from Secord Lake to 230 acre Smallwood Lake to 2200+ acre Wixom Lake to 0000 acre Sanford Lake that flows into Midland and continues from there. Secord Lake has 2 marinas, a party store, The Secord Eagles Social Club and The Lost Arrow Resort where you can dock your boat and fine dine or just enjoy pizza and pop on the outdoor patio. Secord Lake has over 90 miles of shoreline and travels in and out of state land and and has plenty of sandy beachy areas and quiet spots for throwing your worm in. Located half way between West Branch ( new hospital, new Wal-mart Supercenter, Tanger 31 Outlet Mall and right off I-75) and Gladwin ( Laid-back, quaint, old fashioned town, Amish clip-clopping up and down the rural roads) and only 2 1/2 hours from the Detroit metropolitan area makes this a desirable resort, vacation, week-end getaway or a new home away from the city but close enough so the grandkids are within touch. Come on up and take a look around, we're waiting for you. 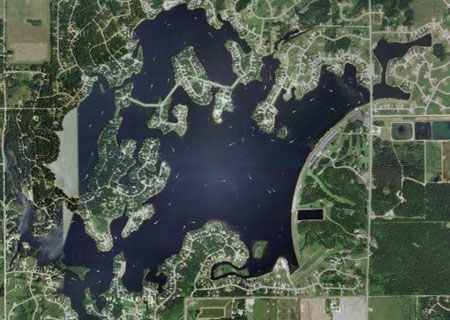 "The Best Kept Secret In Michigan" is how they describe the 4000 acre complex that's called Sugar Springs. Tucked away half way between West Branch and Gladwin is this upscale community with it's thousand acres of all-sports lakes and the 18-hole championship golf course and the Hearth Restaurant and Clubhouse and Pro-shop. Swim year-round at the indoor Olympic sized pool or enjoy a game of Tennis. Meander around the 15 beach clubs (5 are complete with toilets and 3 even have showers.) The campground is nestled away in the woods near the Activities Building where the wildlife abounds. A turf air strip is also available for you fliers. All of the "goodies" would include natural gas, cable tv, underground utilities, and a sanitary sewer system. Paved, County maintained roads, a brand new fire house and a brand new hospital just built in West Branch. Trash pick-up is included in your taxes and is picked up on Monday for the week-enders convenience. There is a wide range of cottages and year-round homes, and camping lots available, something for everyone. Enjoy the pre-paid greens fees, fish, swim, dock your boat on either lake, be as social as you care to be or just bask in the peace and quiet of the natural surroundings. Just two and a half hours from the Detroit metropolitan area makes this a great weekend getaway or your new home away from home. "The Best Kept Secret in Michigan" is out and is waiting for you to come and partake.